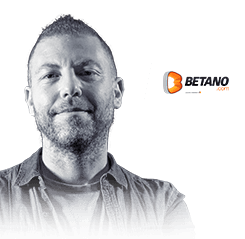 Stelios Asikopoulos studied Computer Science at De Montfort University in Leicester. In 2002 he joined Novartis UK starting his career in IT, working as a Network Systems Administrator. While with Novartis, in 2005 he moved to the commercial side of the business, having passed from the roles of Sales Territory Manager, Corporate Account Manager & Brand Manager. He has been in Greece since 2010, where he has worked in the FMCG industry as a Business Development Manager and later switched to the Advertising & Communication sector, by moving to Another Circus as the Account Director of Kaizen Gaming. He witnessed the “birth” of Betano and its first steps in Romania, as well as its later journeys to Germany, Portugal & Brazil. This summer, he crossed to the other side and is now the Head of Brand Communications for Kaizen, where the mission is to continue to innovate, surprise and always work towards taking the brand to the next level.
When he is not digging deep in brand manuals and campaign plans, Stelios can be found in sport stadiums, cinemas or on a remote Greek island enjoying the sun.