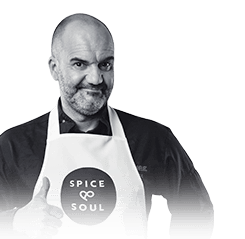 Samuel Le Torriellec (Chef Samuel) was born in Cherbourg, France, and is a French master-chef who chose to come and live in Romania since 2008.

Samuel started his career as a sous-chef and when he finally became a fully blown Chef, he realized he has so much more to learn, so he went back to being a sous-chef in a different restaurant, to gather even more experience.

In France he worked for the first time in La Tour d’Argent – a famous Parisian restaurant with 3 Michelin stars. In addition, Samuel also worked in the La Marée restaurant (with one Michelin star).

In Romania, his fame grew during Master Chef Romania, where he appeared as a guest star in the first season, and then as a juror in the last season.

Between 2012-2019, he was Head Chef of the L’Atelier restaurant in Bucharest which, together with the Epoque Hotel, were included in the Relais & Châteaux network, one of the most prestigious hospitality association in the world.

In L’Atelier, Chef Samuel had the pleasure to cater to many amazing personalities around the world, like Pope Francis, Simona Halep, Mike Tyson, Adriana Lima or Marie Fredriksson (Roxette).

He fell in love with Romania ever since he was a child, when his father, an ex-military, took him all around the country. Then, as an adult, he worked with Remus Nica and came back to Romania with him. He came over for 3 days but never left. The two first worked together at Fouquet’s restaurant on Champs-Elysée in Paris.

Since 20218, Chef Samuel works closely with Kaufland, and he is also the Chef of the Kaufland Pop-op Dinner in Bucharest.