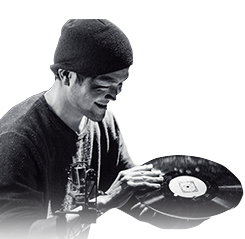 Nao Tokui is an artist, researcher based in Japan. While pursuing his Ph.D. at The University of Tokyo, he released his first music album and other singles, including a 12-inch with Nujabes, a legendary Japanese hip-hop producer. Since then, he has been exploring the potential expansion of human creativity through the use of AI. His recent works include AI DJ Project, where a Machine Learning-based DJ plays alongside a human DJ (Nao, himself), taking turns selecting and playing songs one at a time, and a collaboration with Brian Eno. His works have been exhibited at the New York MoMA, Barbican Centre (London), InterCommunication Center (Tokyo), and more. He published his first book on AI and creativity in January 2021.

Qosmo
Computational Creativity and Beyond. Qosmo is a group of artists, researchers, and designers founded and led by Nao Tokui based in Tokyo. It has the core idea that capturing the organic nature present in AI technologies and generative methods can aid the creative process and enrich artistic expressions. The Experience: Robin Jungers Visualization: Ryosuke Nakajima Diagram, Typography: Naoki Ise