Creativity4Better. Back to Human Touch in Communication. Laura Jordan Bambach 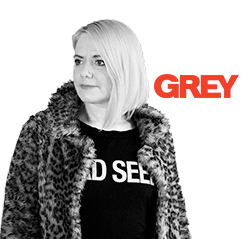 For over 20 years, Laura has enhanced the advertising industry through her fresh, pioneering spirit.
Combining technical skill, with her innate human understanding and passion for storytelling, Laura is recognised globally as an innovator and industry leader.

Laura is a former president of D&AD who has been twice named one of Britain’s most influential people within the Debrett’s 500 annual list and recognised as Individual of the Year at the DADI Awards. She was also honoured in Campaign UK Female Frontier Awards for Championing Change.

A true champion for diversity, Laura is a co-founder of The Great British Diversity Experiment and is also a co-founder of SheSays: this world-famous volunteer network works to encourage more women into the creative industries.

Laura lectures around the world and has written creative curriculum for the RCA, UNSW Art and Design and Westminster University.