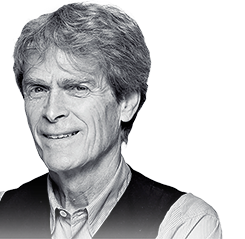 John Hegarty has been central to the global advertising scene over six decades working with brands such as Levi’s, Audi, Boddingtons, Lynx, British Airways and Johnnie Walker.

He was a founding partner of Saatchi and Saatchi in 1970.

John’s creative awards are numerous. He has been given the D&AD President’s Award for outstanding achievement and in 2014 was admitted to the US AAF Hall of Fame. As well as the New York Art Directors Hall of Fame.

John was awarded a Knighthood by the Queen in 2007 and was the recipient of the first Lion of St Mark award at the Cannes Festival of Creativity in 2011.

John wrote his first book ‘Hegarty on Advertising – Turning Intelligence into Magic’ in 2011 and his latest book “Hegarty on Creativity – there are no rules” was published in 2014.

In 2014 John helped set up The Garage Soho, an early stage investor company that believes in building brands, not just businesses.

In 2015, working with Aardman Animations, he created the first global goals cinema campaign for the UN’s Global Goals initiative; Project Everyone.

In 2020 the United Nations World Food Program was awarded The Nobel Peace Prize. According to the Global CMO of the WFP, the cinema campaign written and devised by John, helped the WFP in gaining this prestigious award. Never underestimate the power of advertising.Recently, Addison Capper from LBB has spoken toSir John Hegarty, the founder of BBH and co-founder of The Garage Soho about the future of ad industry awards, the meaning of effectiveness in 2021, and why funny ads don’t win big anymore

AME Awards, the effectiveness focused award show fromNew York Festivals, has partnered with Little Black Book tosponsor the Awards & Events channel. This channel is a place for general news about award wins and any events being held, but it’s also a place to discuss the trends impacting andchanging award shows, such a prevalent part of our industry.

As part of this partnership, LBB interviews some of theadvertising industry’s brightest minds and most reveredleaders on the meaning of effectiveness in 2021, theadvertising awards landscape of the future, and just aboutanything and everything that might come up along the way. Thew series of interviews was started with Sir John Hegarty, founder of BBH and currently co-founder at The GarageSoho.