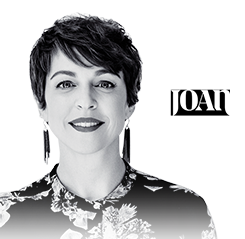 Jaime Robinson, named after the fictional main character in The Bionic Woman (Jaime Sommers), can’t leap over tall buildings, but she can drink a ton of coffee and make things happen. She’s the co-Founder and Chief Creative Officer of JOAN, a New York City-based creative company founded in 2016 with the launch of an advertising agency, JOAN Creative. (joancreative.com)

JOAN Creative uses innovation, creativity and emotional resonance to develop brand strategies and creative work for a variety of clients, including General Mills, Virgin Hotels, Facebook, Uber, and Georgia Pacific. JOAN also has an IP arm, which creates content and products to spur change. This includes the Womanikin, a device invented to combat the gender gap in CPR, which has been enthusiastically adopted by the international CPR community.

Jaime has been honored as one of Fast Company’s “100 Most Creative People in Business,” was one of Ad Age’s “40 Under 40,” and Adweek’s “50 Creatives Whose Brilliant Ideas and Beautiful Craft Will Make You Jealous.” Her work has won in every award show, including three Grand Prix at Cannes and an Emmy for “Outstanding New Approach” to Entertainment.