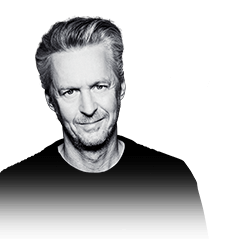 Eric entered the ad industry in 1994 at a mid-sized independent agency in Cologne—proving that you can start a career by operating a color copier.

In 1999 he joined DDB as Art Director in Düsseldorf. Twelve years later Eric was appointed Chief Creative Officer for DDB Germany and Austria with the task to form and lead a new agency out of DDB and Tribal with four offices in Berlin, Düsseldorf, Hamburg, and Vienna. With his open and inquisitive nature, he influenced a new spirit and fusion of digital and creative. During this time, DDB managed to win more than 50 Cannes Lions for several clients, such as Volkswagen, McDonald’s, IKEA, and Deutsche Telekom. In 2013, Eric was appointed to the DDB Global Creative Council.

In September 2016, after 17 years with DDB, Eric decided to open a new chapter in his work life and joined Havas. He quickly gathered the most creative people in the EMEA markets to form the ECC with the goal to build a new team of like-minded creatives that share the same spirit; willing to support and inspire each other on a regular basis. He also helped to turn Havas Germany into a more creative, diverse, and inclusive agency group, having won more than 70 major creative awards including Cannes Lions, One Show, and D&AD since he joined. With his agency group, he is also a committed supporter of the NGO justdiggit.org and helps to fight climate change through the power of communications and creativity.

Eric is also member of the ADC Germany, D&AD, One Club, and German soccer club FC Bayern Munich (well…). He has served on most international juries, including Cannes Lions, One Show, D&AD, Clios, NY Festivals, Andys, and Lynx.

Eric is a father of two girls, a sneakerhead, a committed vegetarian, and a confessed vinyl junkie.