Creativity4Better. The Value of Bravery. David A. Fabry 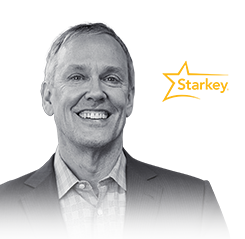 David A. Fabry, Ph.D., is the Chief Innovation Officer at Starkey, where he leads end-to-end innovations within the research and development organization. Fabry received his Ph.D. in hearing science from the University of Minnesota. Subsequently, he divided his career between academic/clinical roles at the Mayo Clinic, Walter Reed Army Medical Center, the University of Miami Medical Center, and several industry positions. He served as President and Board Member of the American Academy of Audiology and was recently elected to the Board of Directors of the American Auditory Society. Additionally, Fabry has served as Editor-in-Chief of Audiology Today since 2008 and is a past Editor of the American Journal of Audiology and Section Editor of Ear and Hearing. He is licensed as an Audiologist in Minnesota, Florida, and Rwanda.