Creativity4Better. Back to Human Touch in Communication. Cosmin Stan 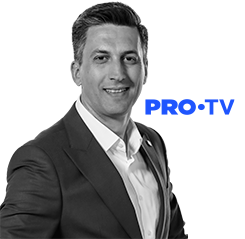 Cosmin Stan is an International Emmy Award winning broadcast journalist based in Bucharest, Romania. Currently a news anchor and senior correspondent for PRO TV Romania, the most popular TV network in the country, he has extensive on air and off air news experience.

Born April 27th, 1978, in Constanta, he started his career really early at the age of 20, working for a local TV station. Meanwhile he completed his higher education studies with a degree in Communication and Public Relations at The National School of Political and Administrative Studies. His dedication and journalistic skills soon brought him in the spotlight making him one of the best local journalists at the time. This is how he got the attention of the most important people in television news industry who offered him the position of local correspondent for the most viewed news program in the country, PRO TV News. Soon after, he was promoted to senior correspondent at PRO TV’s headquarters in Bucharest. In this position he reported on major events of huge importance for the public, both from within the country and abroad. He has been covering impactful stories as major floods and other natural catastrophes around Romania, the 2004 tsunami in Asia, the wars in Iraq and Afghanistan or the Pope visits to Romania.

Hi is passionate about video storytelling and together with his strong communication skills, he always manages to create powerful stories that impact the audience. He is one of the 2 Romanian PRO TV journalists that teamed up and won the first ever International Emmy in Central and Eastern Europe, back in 2008. They got this international recognition for a news series focusing on the very delicate situation of thousands of Romanian kids left home by parents that went abroad for work right after Romania’s accession into European Union.

Throughout his career, he has been also involved in various different projects with CNN International. He worked with CNN teams for The Autumn of Change (2009), The Freedom Project (2011), The Gateway with Becky Anderson (2013), offering both editorial and logistical valuable support. He has extensive news management expertise including planning, budgeting and managing human and financial resources. Always meeting deadlines and leading initiatives. Able to coordinate, plan and communicate resourcefully.

He now anchors morning newscasts every weekend and reports during weekdays on the major events around the country and the world.

Cosmin is married and is the father of two wonderful kids. He is passionate about aviation and travel and so far, he has visited more than 50 countries.