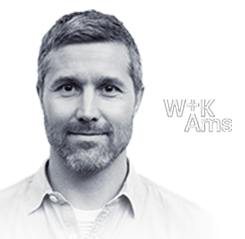 Blake is a Global Partner at Wieden+Kennedy and Managing Director of the agency’s Amsterdam office where his clients include Nike, Samsung, Facebook and Montblanc. He has been with W+K for ten years and previously led their Tokyo and Shanghai offices. Prior to W+K he spent three years in South Korea leading Samsung Mobile’s global digital marketing team. Blake holds a BA in Japanese from SOAS, an MBA from INSEAD, and has provided guest lectures at NYU Stern, Wharton, INSEAD and London Business School. Blake had a short-lived international career as a Judo player, speaks five languages, produces music, is a mentor for Startup Amsterdam, and an advisor to the Dutch Ministry of Social Affairs.