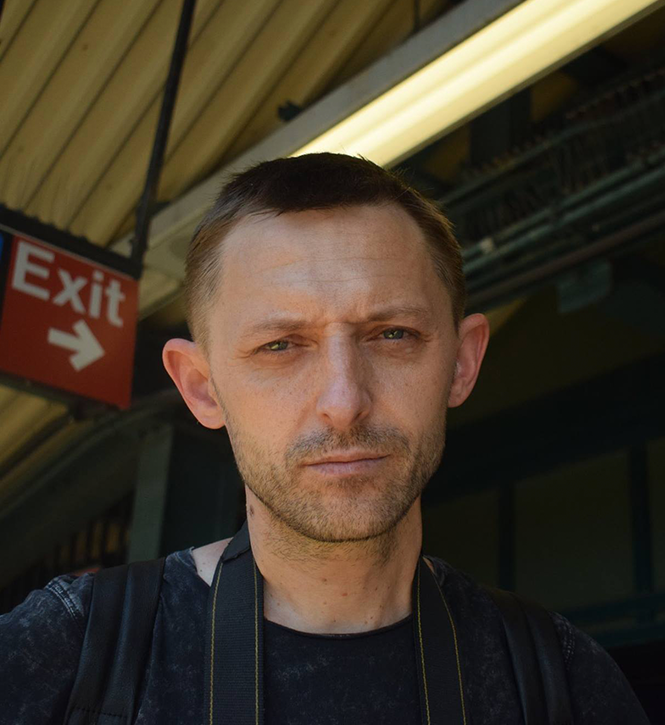 Discover Roman Tolici’s biography and a selection of exhibitions.

Roman Tolici was born in 1974, in the Ghetlova village, located in the centre of the Republic of Moldova (former USSR member.) He started studying arts at the Igor Vieru Arts School in Chisinau, but his interest for images and for the visual culture has been nourished from his very first years of life, by his family. He moves to Bucharest in 1990, after receiving a scholarship at the Nicolae Tonitza Arts Highschool from the Romanian state. In 1997, he defends his BA thesis in a public exhibition entitled Identities, organised in the Constantin Brancusi Hall of the Palace of the Parliament.

After trying his hand at graphics and animation, cartoons and photography, Tolici establishes himself as a painter. His work is associated with a photographic realism infused by poetry and a surreal sense of everyday existence. Tolici’s paintings seem to be details of a monumental story related to the general human questions and anxieties. This narrative force turns the recurrent subjects into never-ending chapters and the reflections of everyday life into projections about time, memory and traces captured by the artist's tender perception.

“Tolici’s paintings take us to places where the laws of figurative painting – perspective, spatial relationships, proportions, light and shade, colour and tone, shape, line and form – are implemented with incredible accuracy and underpin his chosen imagery with a convincing realism. Yet they remain painterly, the hand of the artist always present. And just when the laws of the real world and realistic painting come to the fore, Tolici takes us somewhere else. It is as if he breaks through a glass ceiling and leads us to places surreal, irrational, metaphysical.” (Matthew Price, curator)