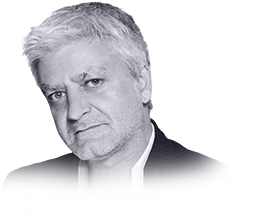 Stéphane spent his teenage years marvelling over Stan Lee, waking up before his parents and leaving croissant crumbs all over the comic strip page of their morning paper. Already as a kid, he had an appetite for cliffhangers and great stories with unexpected endings. He’d entertain his friends by making up fantastical tales and judging by their reactions he figured he probably had some sort of talent for it. Not unexpectedly this led him to start his career as a scriptwriter, notably for Canal+.

BETC believes in the power of creativity to drive business results. The agency works with over one hundred brands, including Air France, evian, Citroën, CANAL+, Louis Vuitton, Lacoste, McDonald’s, Disneyland Paris, LEGO and many more.

Under his tenure, BETC has turned into the largest agency in France and Europe, one of the most awarded in the world, mostly due to the endless stream of campaigns created by Stephane for CANAL+. These campaigns include The Bear spot, which is the most awarded advertising film in history and also The Closet and March of the Emperor. The Aimen campaign digitalised the Holy Bible and used AI to reach social media users for CANAL+ and recently the wacky trilogy brought out to announce  the partnership between CANAL+, and  Netflix.

Recent work produced under Stephane’s quirky and careful creative direction is the innovative Instagram campaign Like my addiction which won 19 Cannes Lions (2017), as well as Game Chaingers for Unicef (2018), a groundbreaking project using blockchain technology to raise money for the Syrian Childrens’ Program and Seetroën, the first glasses to cure motion sickness, invented for Citroën.

In recognition of the consistently high level of creative work and rich company culture, BETC was named Adweek’s International Agency of the Year in 2019.

Stéphane is also the inventor of CAI (Creative Artificial Intelligence), a unique software robot that creates ads and demonstrates the downsides of the industry.

In 2010, he founded BETC Academy, the agency’s internship programme that still runs twice a year, offering young talents senior mentorship and the opportunity to work with real clients.

Stéphane was named Head of the Havas Global Creative Council in 2019.