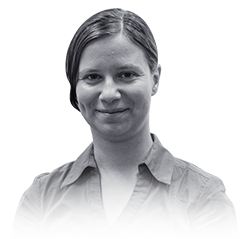 Dr. Aurora Simionescu is currently an astrophysicist at the Netherlands Institute for Space Research (SRON), having been recently awarded the “Women In Science Excel” fellowship by the Netherlands Organisation for Scientific Research. Prior to that, she spent five years at the Institute of Space and Astronautical Sciences of the Japan Aerospace Exploration Agency and four years as a NASA Einstein Postdoctoral Research Fellow at Stanford University. Her research has focused on the interplay between black holes and the growth of structure in the Universe ever since she first started her PhD studies at the Max Planck Institute for Extraterrestrial Physics in Garching, Germany, where she graduated summa cum laude in 2009.
Dr. Simionescu has received multiple awards for her science outreach and communication efforts, including the Science Prize of the Romanian Radio Broadcasting Corporation in 2017. She was also recognized on the “New Europe 100” list of outstanding challengers who are leading world-class innovation from Central and Eastern Europe, compiled by Res Publica, Google, the Visegrad Fund, and the Financial Times in 2015.